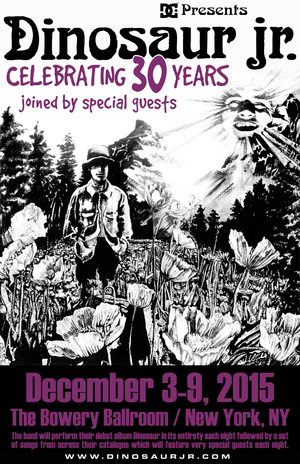 Dinosaur Jr are American indie rock icons. To celebrate thirty years of their music, the band is playing seven sold out shows at Bowery Ballroom.

Since their return, Dinosaur Jr has released three solid records, the same number of releases as their initial run in the late 80s and early 90s. Now that the Dinosaur Jr reunion train has been chugging along for a decade, it's fair to say that their output of new material does anything but tarnish their legacy. However, this celebration sees the band playing their debut record in full followed by select hits from across their vast catalogue. "There is no opener. It's just Dinosaur Jr all night long" exclaimed an ecstatic Henry Rollins after delivering a triumphant introduction. The band then proceed with their debut album from start to finish. Even today, it's rather awe inspiring to see them unleash killer classic rock riffs melded with crushing hardcore blast beats. The trio's balance is their true core, even as Mascis takes his guitar solos to dizzying heights, Murph and Lou are such a tight rhythm section, their bond locked tight and firmly in sync. Their range of influences and appeal is unlike so many other bands. Where their friends and contemporaries in Sonic Youth tackled the no-wave scene and the Pixies brought sunnier melodies to punk rock, Dinosaur reeled in classic rock that influence grunge and alt-rock in a way all their own. "This is a dream come true" said Jeff Tweedy as he joined the band during their second set. As the band ran through classics "Feel the Pain", "In a Jar", "Tarpit" and "Freak Scene", they were joined by their friends. Particularly thrilling was when soul legend Charles Bradley came out to help cover Neil Young's timeless "Heat of Gold". A truly graceful and timeless cover, it was a short break from the heavy swells of their other tracks. Masics' face melting guitar style is so unique, his DNA embedded in each Dinosaur track, it's impossible to mistake them for anyone else. For a real treat, Henry Rollins joined them onstage for an unbelievable and downright punishing version of "Don't", his intensity as vibrant as ever. It was a real special moment. Over the years, Dinosaur Jr has played their other classic-era albums, You're Living All Over Me and Bug, from start to finish and even as reunions hardly feel that special these days, seeing this band perform in top form is a truly amazing experience. Their love for and willingness to please their fans is remarkable, especially given their notorious internal feuds. For the encore, Tweedy joined the band again, this time to "do a hippie jam" as declared by J. This time, it was another Neil Young cover, the staggering "Cortez the Killer" in which Tweedy and Mascis traded massive riffs and walls of reverb for a magical moment.