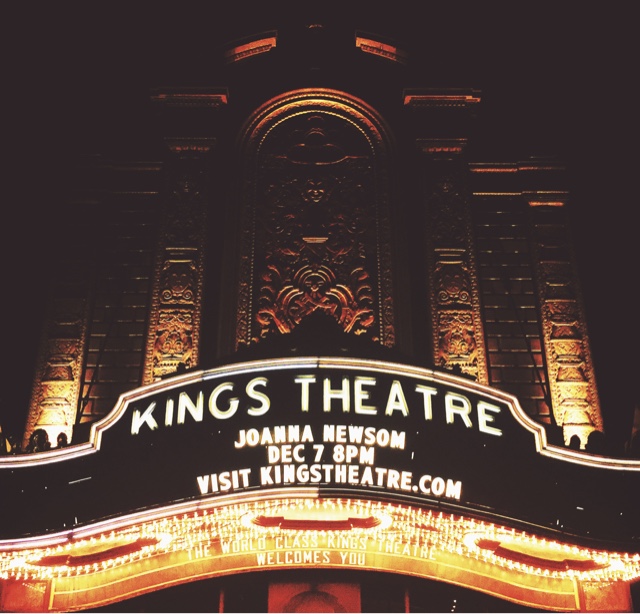 Joanna Newsom just released her first new record in five years, Divers. She made way to the exquisite Kings Theatre for her first New York City show in just as many years.

Newsom constructs elegantly complex and riveting music full of majestic stature. Her classical harp sound is unfound in the rest of contemporary pop (or indie music for that matter), but where her last two releases felt particularly epic and sublime, her newest material is perhaps her most straightforward work to date. She kicked off the night with "Bridges and Balloons", a sincere fan favorite that saw the crowd gush with joy and elation. The evening followed with a perfectly well crafted set list spanning all four of her full length records. Behind her, a gorgeous tapestry shone and when illuminated, replicated the most spectacular setting, an Aurora Borealis type effect that only heightened the sensory overload. Her band was stunning, their intricacy exposed on a major scale. The almost spontaneous sounding "Peach Plum Pear" was astounding, a true moment of brilliance that was complimented with the ornate renditions of "Emily", "Soft as Chalk", and recent highlight "Divers". Her witty charm was ever present as well, offering the crowd into a glimpse of her mesmerizing world. As the twinkle of "Cosmia" rang out, she cried "But how did you know so soon?", basking in her well deserved glory, the audience on the edge of their seats in anticipation of each subtle pluck of the harp. She was impeccable, each moment even more grand than the one before, the night lifting into the cosmos, a divine experience on every level.  "Leaving the City" sounded even richer onstage, the grand setting only adding to the refinement of her compositions. "Can I gage the temperature of the room, do you want an old or new one?" she asked before an overwhelming reply descended upon her. One person yelled "Only Skin", to which she responded "but what if I did?" (an enormous sound of laughter and hope combusted). Yet, as the slow trickle of "Sawdust and Diamonds" rang out, it was an unequivocal moment where all expectations were cast aside and the true magic of the evening reigned supreme. She concluded with an equally touching version of "Baby Birch" that solidified the exceptional occasion.