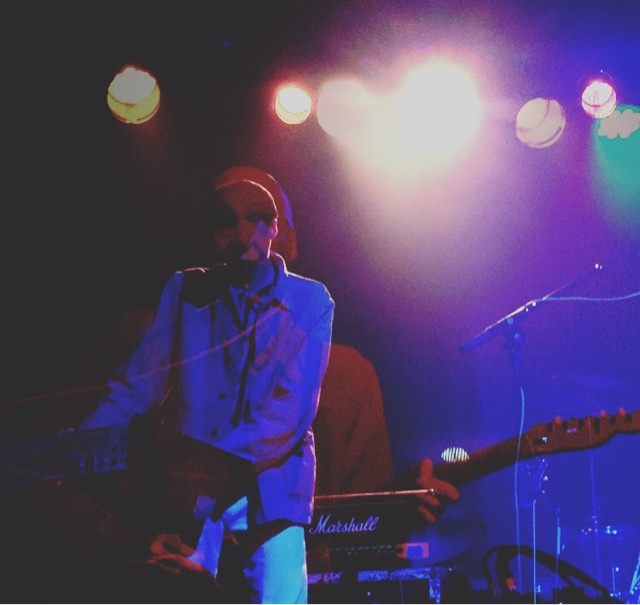 
Atlas Sound records sound nothing like the live version. Structured pop songs loose all shape and explode in size as Bradford manipulates pedals and sound boards to create hazy collages that ooze ambiance and fascination. It all generally bleeds together, each loop morphing into the next as subtle guitar notes embellish shoegaze tendencies. Hidden behind a spooktacular Halloween mask, Cox further pushed his costume and character nature, an often forgotten aspect of his live setting. His improvised electronic jams seem to be a testing ground for new ideas, "Shelia" was the only song I recognized, and while some can find the head trip a real treat, others can easily get lost in space.

After a brief intermission, the band assembled (currently, they're a quartet) and sprung right into "Desire Lines". Fading Frontier is a step away from the agitated sound of their previous album, Monomania from which no songs in the set were featured, and thus allowed the evening to feel a lot looser and really allowed the band to stretch of the jams. Bradford and Lockett took firm positions at the front of the stage with the rhythm section tightly locked in the back. Transitions were flawless, "Breaker", "Planet Duplex" and "Revival" all flowing with swift precision. Breaking from the record, "Living My Life" was tremendously upbeat with a dance-like rhythm that breathed a whole different life into the band, unlike anything they've ever recorded. It was really intriguing to hear such a different version of the track, showcasing Deerhunter's amazing skill to always keep people on their toes. Bradford was chipper, thankful and careful to prevent himself from any potential lawsuits. Moses Archuleta was in perfect form for the blowout performance of the always jaw dropping "Nothing Ever Happened", not once relinquishing the beat as Cox teased in Patti Smith's "Horses" towards the end. The track blasted on for what seemed like forever, the band triumphantly indulging in their own ear candy of sonic treasure. For the encore, the band hit it right off with "Intro" and "Agoraphobia", the opening sequence to the brilliant Microcastle. The sound was loud and hit right to the core, grabbing hold of the crowd for a ride through their sonic landscape. Much like the show opened, the conclusion was a smoldering blissed out electronic daze. Slowly twisting away at pedals and strings, the band slowly brought the show to a full circle and complete finish.
Posted by marc at 1:03 AM