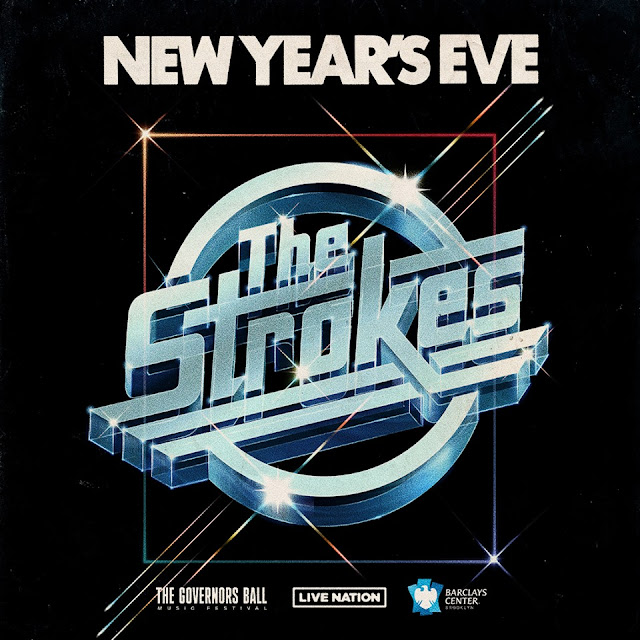 The Strokes made up for their cancelled Governor's Ball headlining slot on New Year's Eve with a midnight performance at Barclays Center with help from Mac DeMarco and Hinds.

The first time I saw the Strokes was December 31, 2003 in Las Vegas. It was the end of their Room on Fire tour and Kings of Leon and Regina Spektor were the openers. This was a big moment in time for all of these bands. Spektor was still an unknown and was so drunk she couldn't finish a single song, KoL were on the verge of blowing up, although it would still be years before their mega-stardom success of "Sex on Fire" and "Use Somebody," so seeing them in a small(ish) venue felt really special. As for the Strokes, it was probably the last year of their prime. A few years earlier, they were the rock and roll darlings here to save music and revive the downtown scene in New York City, but after 2004 it seemed impossible for them to write another hit. They would never recapture the magic of their early years and while I still believe that their sophomore record is criminally underrated, it would only become more difficult to defend them and their new songs. Sure there were a few gems along the way, but nothing ever came close to the brilliance of Is This It. For me, this show became my "Losing My Edge" moment, I was there when Regina Spektor and Kings of Leon opened for The Strokes on New Year's Eve! I've told the story to anyone who would listen so the idea that I could relive this former glory and now in my own home borough of Brooklyn felt wild beyond my dreams. Going on a bit too long after 11:00, the hometown heroes ambled their way on to the stage and cranked into a sprinting "Heart in a Cage," immediately getting the crowd hooked and used the momentum to whip through an inspiring "You Only Live Once" before getting down to business. While tracks from First Impressions of Earth got the crowd pumped, as soon as the opening riffs of "The Modern Age" rang out, it was total euphoria. Sure, the allure of a Strokes New Year's Eve concert in 2019 isn't what it was back in the early aughts, but hearing any song from that classic debut is sure to evoke the utmost nostalgic bliss. "I'm just rambling because I thought you guys were gonna turn up the distortion already" grumbled Julian before the band tore into "New York City Cops" which delighted the crowd to no end. Each song felt like a mega-singalong, everyone doing their best to keep up with Julian's crackling croon and garbled yells. Even while the hits were coming strong, the excitement of the band can still seem pretty dim and I often wondered if the only time these guys speak to each other is when they're on stage. The emphasis on effortless feels more prevalent every time they remerge, "they've been selling the same damn t-shirt for twenty years," I overheard by the merch booth. They can't even be bothered to come up with a new design at this point in their career, but the guys make no mistake about it and don't even try to pretend like they aren't aware at the state of their career. "Angles? What's on Angles? I don't remember Angles!" Julian yelled and one point. His banter between songs were almost as exciting as the tracks themselves. "Mixed reactions to the new songs, OK. I've been there, I get it. We sold out! Oh, Albert says we didn't sell out, we bought in." The band launched right into "Hard to Explain" after the midnight countdown and again the crowd melted away. "Reptillia" and "Barely Legal" were two more gems that concluded the main set and left things on a rather high note. "I don't get encores. None of us do. We never used to do them, but you know, it's on the contract so..." After that, the band slammed into an absolutely stellar "Last Nite" which was an incredible moment and for sure one of the best possible ways to kick off a decade. It was raucous and loud, full of flashing lights and the perfect uptempo rhythm. Albert's solo still absolutely crushes and when he hits it, there is no bigger rockstar moment he can accomplish. Nearly twenty years into their career, the band has their groove locked in tight and still full of fire. When The Strokes play the hits, there is nothing better. The next one was a deep-cut for true fans and the most surprising moment of the show as the band brought opener Mac DeMarco onstage to fill in for Regina Spektor on the b-side "Modern Girls and Old Fashioned Men." This was an absolute shock and phenomenal surprise for fans worthy of the evening. One more new song made its live debut and then the band quickly wrapped it up with a blazing version of "Juicebox" (again, First Impressions of Earth holding up better than I ever expected) before closing with "What Ever Happened?" (an interesting choice over "12:51") and the highly requested from the floor "Someday." It was a phenomenal evening and killer end to their set, proving once again that while The Strokes may have only been able to capture that magic for a brief time in their career, they can still dazzle and put on a show worthy or high praise. An instant classic that has lost the instant and now just some songs that stand the test of time.