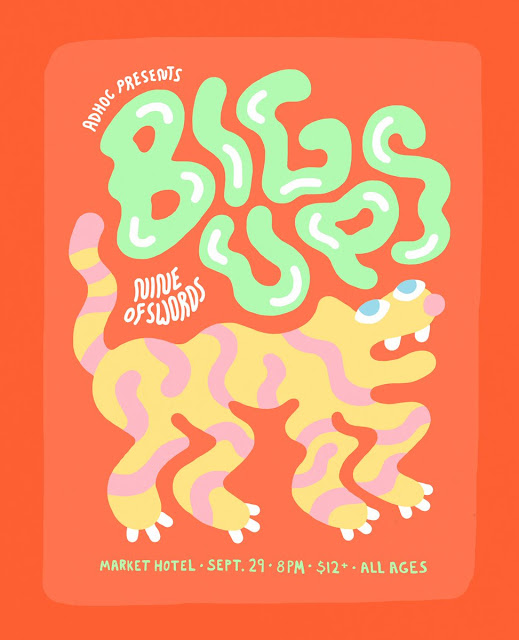 Big Ups played a hometown show at Brooklyn's Market Hotel in support of this year's awesome Two Parts Together.


"It's pretty rare when we're not the heaviest band on the bill, so this is pretty fun" singer Joe Galarraga exclaimed early into the band's headlining set and while that might've been the case, Big Ups certainly saw the biggest reaction and the biggest mosh pit of the night. The band does a terrific job of balancing the extremes of their sound with a more methodical soundbite. Their ability to hold tension into short bursts really elevates their sound and exposes their inspirations from many Touch & Go artists that it would be easy to convince a listener that any of their records came out in the same time period as The Jesus Lizard or Slint. Galarraga's stance and mannerisms onstage are explosive, taking charge at just the right moments and really adding an additional force to the band's already pummeling sound. On tracks like "Capitalized," the band really leans into their more aggressive notes, charging into the crowd and letting loose of total pure energy, while "Imaginary Dog Walker" allows for their more menacing presence to come alive. "National Parks" was the peak of the night and saw the band at their absolute best, really taking the reigns of the extreme and unleashing pure chaos. Their blend of post-hardcore and post-rock is even more apparent live than in the studio and watching the band rip apart their songs onstage is a really impressive sight. Galarraga's intense shouts bleed into furious guitar riffs while the band holds steady to their pace, never once allowing the songs to get out of their control. Their power is commanding and almost ready to take on a new level of venue size and following. It's easy to imagine them beginning to take on some early festival slots or opening for some bigger bands in front of some larger audiences in the very near future.
Posted by marc at 9:47 AM