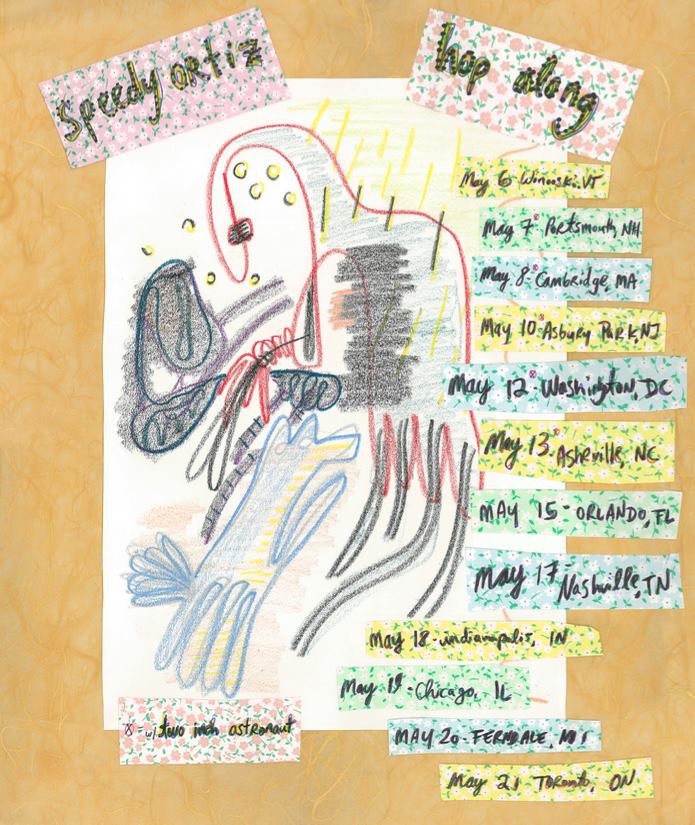 Speedy Ortiz and Hop Along have been gaining some fame over the past few years in regards to their contributions the alt-rock and emo-revival scenes. Together on tour, the two bands make for an excellent night and guitar-powered rock.


Hop Along took the staged to a filled room and rocked through songs from last year's great Painted Shut as well as the recently reissued Get Disowned. Frances Quinlan's voice is as powerful as it is unique, changing at the drop of a hat from delicate whispers to massive howls. Her control acting as a secret weapon to the band's already tight stylings. Behind her, the band's blend of folk-punk and post-emo created rich and dynamic sounds. It's no wonder here that they've signed with Saddle Creek. The audience screamed along with such emotion and attitude to almost every song, but Frances kept the night in her complete control. "The Knock" and "Laments" in particular saw her primal growl reach full potential and "Tibetan Pop Stars" truly showed the new level of heights the band has reached in recent years. Their lyrics are intense and personal, recalling deep feelings of the past and yet the band plays with such vigor it's as if each night is a brand new experience creating a great sense of energy and hinting at further greatness to come their way.

Speedy Ortiz had some trouble getting things started, "we're a messy band that loves drama" announced Sadie Dupuis just as things kicked into gear. Bass troubles and a general sense of mishap triggered some slight worry, but slowly disappeared as the band found their groove a few songs into their set. Hop Along's music has meatier hooks that pushes the band's pop sensibilities, but Speedy really resonate with a more speak-sing style of vocals and heavily distorted guitars that brought a compelling contrast to the evening and Dupuis' ability to command a stage with her raw sense of humor made for some great moments between songs. "Raising the Skate" and "Tiger Tank" we're detailed with scuzzy feedback and solos ran rampant with heavy fuzz making for a heady experience of guitar distraught and destruction. Two new tracks (both about Internet porn, apparently) found their way into the mix as a thinned out audience cheered along to the frazzled lo-fi aesthetics. Still, while emo might better suit the sound of Hop Along, but Dupuis' personal and powerful lyrics ("you still picked a virgin over me") tug at emotions below the skin utilizing words to dig into those listening just as much as her jagged guitar.

On the surface, both bands fit the bill of your generic indie rock, yet in reality both have equally different and powerful things to say. Hop Along's more polished sound made for a stellar showcase of brilliant vocals and carefully crafted melodies. Speedy Ortiz on the other hand uses their lyrics to speak volumes under blown-out guitar tones to bolster their performance. Catching both in one evening is a real testament to two bands seeing some tremendous, well-deserved payoff.
Posted by marc at 8:04 AM

Email ThisBlogThis!Share to TwitterShare to FacebookShare to Pinterest
Labels: Hop Along, Speedy Ortiz