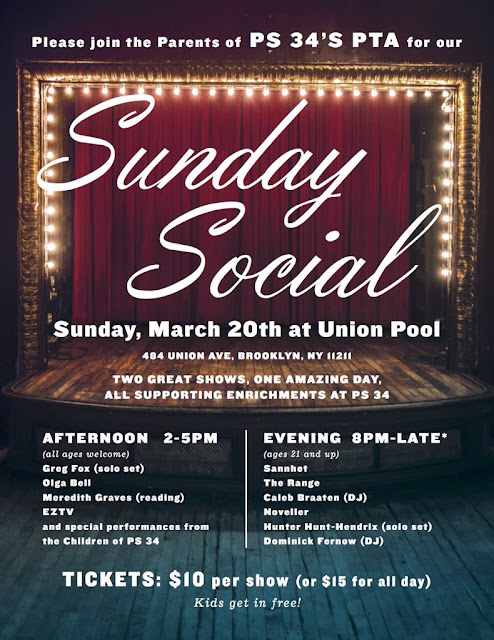 The PTA for Broklyn's PS 34 hosted a Sunday Social to benefit the school's art program. Organized by Brandon Stousy, the show featured a wide array of experimental performances.


The adults only even portion kicked off with a short DJ set from Dominick Fernow (better know under his monikers Prurient and Vatican Shadow). It was a relatively light affair with some rather laid back tones and more melodic frequencies. A step away from the agitated noise of his other work, it was a pleasant intro for the night.

Up next, Hunter Hunt-Hendrix put on an insane electronic set of intense samples and mutilated vocals. By no means an aggressive set, it built on repetition and worked in some intricate grooves, but was still out their in the realm of some real experimental and unique sounds. To follow that, Noveller brought some heavy drones and ultra shoegaze-y vibes to the room. Epic waves of distorted, ambient guitars ebbed and flowed over the crowd, as Sarah Lipstate's inverted notes swept through the space. Textured guitars invoking deep seated pleasures of euphoric reverb resonated highly with each track presenting interesting loops and striking moments. Her isolating wordless pieces rely heavily on the ability to breath and gestate on their own, commanding attention without ever being over assertive and perfectly heady while still maintaining focus.

The Range brought yet another side to the evening's varied line-up. The IDM and techno infused electronics were the catchiest and must danced induced vibes of the night. "This set is all new stuff, not even on the album that comes out on Friday" stated James Hinton as he began to loop warped vocals and dubby rhythms for the next 45 minutes. Twitching beats and fragmented melodies kept the crowd swerving to the hypnotic tunes. It was a deep display of how to keep sounds on the verge of various genres without really committing to anything in particular and still creating interesting sonic palettes.

Brooklyn's own Sannhet closed out the evening. Their killer blend of metal and post-rock consistently rewards with perhaps the best live show of any Brooklyn making the rounds. Overlays of static and television snow along with blinding strobe lights overload the senses and command undivided attention as the trio powers through a blistering set. Their sweeping set takes cues from Mogwai's heaviest moments and the dynamics of Explosions in the Sky that enable any moment to feel truly epic. They're a real powerhouse that never overwhelms, yet still comes across as a serious force. Their music leaps to staggering heights and pulverizes with serious tension. They dazzle and surge with the thunder of Thor's hammer. Fluid fills and brilliant timing allow the drums to anchor their sound as bass lines crash like thunder and the guitar ricochets into oblivion. A perfect dose of the loud-soft-loud lineage many have come to love about post-rock, but with an edge that takes the turn for blackness, pushing the envelope just a smudge, but enough to feel inventive, thrilling and exciting all at once. It might not have been the most typical benefit for the kids, but it certainly was one of the most original and inventive.
Posted by marc at 12:56 AM