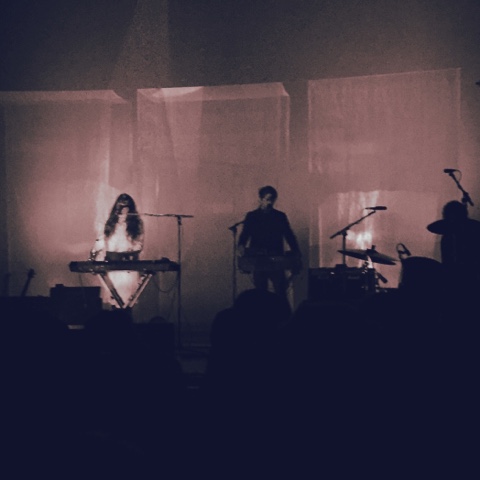 2015 was a tremendous year for Beach House. The duo released not one, but two magnificent albums and brought their wonderful show to New York for a three night sold out run.

"There's a place I want to take you" sung Victoria Legrand on "Levitation", the band's first song of the night as the Baltimore dream-pop sensations welcomed the crowd to their cosmic utopia. It couldn't be a more fitting lyric to introduce the show. Over the course of six albums, the band has morphed from a duo making chamber-pop into a fully flexing quartet aiming for intergalactic heights. Imagine a setting where Slowdive and Mazzy Star rule the airwaves and you're getting warmer. Through Legrand's husky smoked-out vocals, the band warps time through a twisted haze of interstellar beauty. Lush sonic head spaces expand to another realm, engulfing the audience in one fell swoop. Enchanting choruses of "ohhs" and "ahhs" smother songs through heavy reverb adding new layers of warmth and beauty. "All Your Yeahs" was a particularly thrilling number and "Silver Soul" was utterly spectacular. There was no dull moment. Whether it was "Other People" off Bloom, a spellbinding "10 Mile Stereo" from the awe-inspiring Teen Dream or the nostalgic crispness of "Master of None", Beach House were a true sensory triumph. Lights dazzled and gradually created more of an atmosphere experience as the night progressed, entwining perfectly with the band's celestial sounds. Shimmering projections of an underwater expanse, astral plains and other contortions swerved over the band creating unique landscapes for each tune. An extra emphatic drum beat propelled the second half of the show and an all out rock assault lead "Wishes" which was full of wondrous hair flips and head bangs. It was clear the band was ready to deliver a masterful show and not once did they stop short. After a sensational and crowd loving "Myth" ended the main set, Legrand and Scally emerged alone for the encore. To start the close out of the evening, the band dove straight into "Saltwater" delivering majestic bliss to their truest fans. "That was the first song we ever wrote" noted Victoria as the hymns of "Sparks," perhaps their biggest single to date capped off the splendid evening. It was a truly immense evening full of brilliant hues and delightful melodies. Watching them grow from simplistic organ fueled bedroom pop into an astounding ethereal shoegaze-y capital B band has been a marvelous journey. It's hard to leave a place this welcoming and joyous.
Posted by marc at 7:46 AM