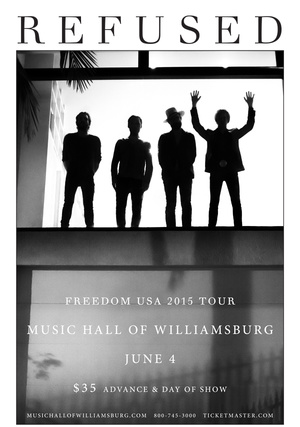 Refused are back with their second reunion tour and first new album in 17 years. They dropped in at Brooklyn's Music Hall of Williamsburg for an epic night of chaos.

After releasing one of my favorite albums of the 90s, the classic The Shape of Punk to Come, Refused self destructed just as they seemed to reach artistic critical mass. Their last tour during their original run ended with a final show in a basement in Virginia with about 40 people in attendance. When they returned in 2012, they were one of the top billed bands at Coachella. Now, on their second reunion tour, this time with a new guitarist, the hardcore veterans are backing a new album, Freedom, and have enlisted the help of producer Shellback (most famous for working with mega-stars Taylor Swift and Britney Spears). Taking the stage to Kendrick Lamar's "King Kunta", the band roared through "Elektra", the lead single from the new record and the audience was bursting at the seams as high octane punk anthems soared to towering heights. Frontman Dennis Lyxzén was in full form, delivering high-kicks, wild leaps across the stage, and swinging the mic like a day hasn't passed in the near two decades since Refused was normal day job. His swagger and prowess onstage is unmatched and gives Jarvis Cocker a run for his money as one of the best frontmen in the game today. Playing at break-neck speeds and with white knuckle intensity, the band lit a fire that set the night ablaze. Blasting ahead full throttle, there was no slowing the quintet down, each song played with more potency and passion than the one before, never breaking for oxygen. "The Shape of Punk to Come", "Refused Party Program", "Coup d'état", "Refused is Fucking Dead", it was an absolute bombardment of hardcore punk played at an arena level. While a lot of bands on the reunion train these days are playing to the biggest crowds of their careers, the fact that Refused broke out of the basement and into a major spotlight is a serious testament to their skills. "We grew up idolizing New York and envying the tough guys in Brooklyn and Queens. We were a bunch of tiny dudes from a small village near the Polar Circle. I traded a Napalm Death album for a Youth of Today record and if I hadn't, we wouldn't be here" exclaimed Lyxzén. Their riffs exploded with volatile spirit and their drums pounded like a jackhammer but with such tenacity and complexity it's no wonder their landmark album was named after one of Ornette Coleman's jazz epic. The set was filled with fan favorites and for the encore, the band debuted "366" for the first time live followed by an absolutely monstrous "New Noise" which seemed to send the crowd into overdrive. A true blend of hardcore noise, abstract drum patterns and an unbelievable ability to indeed scream, Refused have re-embarked on a mission truly all their own.

Email ThisBlogThis!Share to TwitterShare to FacebookShare to Pinterest
Labels: Refused

This was my second time attending an event at this place, and was my first business event here (the other event was a charity show). Everything at space Miami events was perfect, the drinks and food was amazing. Even the coffee was wonderful.