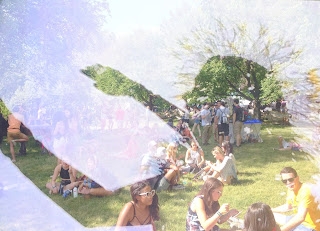 For years, the American music festival landscape was dominated by three big players: Coachella, Bonnaroo, and Lollapalooza. Recently, small upstart festivals have been giving the big three a run for their money in terms of line-up and accessibility. New York City's Governor's Ball has shaped up to be the northeast's premier summer festival.

Drake topped Friday's bill and delivered a hit filled set that found him alone onstage backed at first by a giant screen and shortly after a luscious jungle. "I'm not lying, this is 100% the best festival crowd I've ever seen" he repeatedly told the audience. After dropping hit albums and guesting on countless songs, Drake is running at the top of the game. A true bonafide pop-star, the crowd screamed along to every word with pure joy and elation. Yet the biggest response of the night came for his iLoveMakkonen collaboration, "Tuesday". "Hold On, We're Going Home" was easily his suavest and smoothest performance of the night, and also the longest rendition he did of any track. "Ok, y'all know I got to do that candles and bath shit for the ladies, but that's over now, I know what you came for" he exclaimed before returning to his tougher hits. Capping off the evening with a massive fireworks display, Drake is currently basking in his glow as the reigning king of Hip Hop.

Death From Above 1979 continue to support last year's The Physical World, which sounds a lot like their 2004 record I'm a Woman, You're a Machine and is probably better than you remember. Sound trouble plagued some of their set as vocals and bass cut-out, but the duo were still a high-power act full of great energy late in the afternoon. Florence + the Machine took to the main-stage later than expected but delivered a stunning set with festival ready sing-a-longs as Welch's bellowing voice rang out across the fields. "Shake It Out" and "The Dog Days Are Over" were met with hearty screams and a final dance send-off proved her indie-pop crossover is no joke.

The insanely talented St. Vincent was on-point for her dazzling set of buzzy guitars and fuzzed synths. Her dancers sparkled behind her and tight funky choreography was fantastic addition to an already tremendous set. Her take is all her own, defying genres and boundaries with each vibrant stroke of her guitar. A mid-afternoon set from groove makers Chromeo brought heavy dance vibes to a dampened crowd just as the sun appeared to take over the day. Bringing out Ezra from Vampire Weekend to cover "Cape Cod Kwasa Kwasa" was a huge plus and their show carried the pace for the rest of the day. 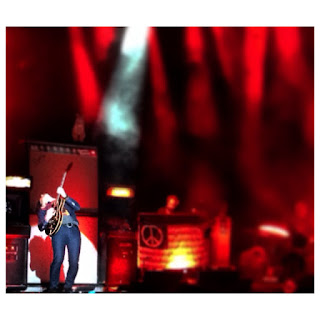 "Seriously, fuck that shit. Trying writing this song on your iPhone. We're living in a Terminator nightmare, man." Those were the words Ryan Adams chose for Deadmau5 as the two played opposing time slots Saturday night. Adams' bonafide classic Americana rock and roll was a definite crowd pleaser despite his crowd size being far fewer than the EDM giant. Spewing jokes between his anti-EDM foder, Ryan and company set up the stage with classic arcade games and other nostalgic remnants that added that extra kitschy vibe to their well worn sound. Guitar licks and extended jams were a plenty and deep cuts "Oh My Sweet Carolina", "Cold Roses", and "New York, New York" were elegant. "I thought I was writing metal songs. How high was I?" he proclaimed during his set. These definitely aren't heavy metal tunes, but Ryan Adams knack for song writing is exceptional is his own way. His balance of tearful ,countrified ballads and huge soaring riffs made for a sincerely sweet end to the evening.

Playing to an overstuffed Gotham Tent, Future Islands ripped through a stunning set to their largest ever NYC crowd. Powerful rhythms and synths drive their sound, but Samuel T. Herring's show stopping command of the crowd was highlighted with his usual chest pounds and hip thrusts. Herring's hardcore screams and awe-inspiring dance moves never cease to amaze and for a band that was no strange to small DIY venues a year ago, their transition to huge festival crowds is phenomenal and one of the best performances of the weekend.

New York City has been having a bit of Björk movement as of late. Between her career spanning retrospective at MoMA and her residency at various theaters, the Icelandic queen has been hard to miss over the past several months. Still, her set was nothing to miss. Beginning with highlights from her latest release Vulnicura, she followed a similar style to her shows from earlier this year. Fantastic visuals of reptiles and insects, an orchestra decorated in all white, and the Haxan Cloak behind the boards, she was a pure sight to see. However when she dropped an absolutely slamming "Army of Me", the crowd really began to take hold of the moment. Her costume, a velvet butterfly ensemble and intricate head mask was a little lost in the early evening sun, but hugh fireball explosions and fireworks ignited the crowd and made up for any complaints of lack of visuals. Her voice also broke through the fields never giving into the harsh evaporating acoustics of festival grounds. When she closed the set with "Hyperballad" it was a declaration that as the most avant-garde performer not only on the main stage, but the festival as well, Björk can do as she pleases and still win over anyone in attendance. 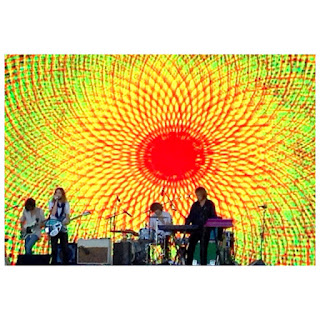 As the sun set across from them, Hot Chip banged out an eclectic performance of infectious tunes from throughout their catalogue. Dizzying strobes and cascading lights were stellar additions to their already glorious anthems. "Over and Over" and "Flutes" are still raucous tracks that had the crowd dancing the night away while "Ready for the Floor" propelled the energy to the set's all time high. To close out the night, the group served a tasteful and rousing cover of Bruce Springsteen's "Dancing in the Dark" much to the delight of the audience who sang along as darkness settled in for the evening.

Still riding high of the success of their remarkable Lost in the Dream, The War on Drugs basked in a glorious afternoon sun to unleash their glistening guitar jams that seemed to swell to even larger heights live than they did on record. Emphatic "woos" were a signature feature highlighting the band's brilliance and ability to replicate such intricate and harmonies melodies. Solos and heavily saturated jams were prevalent and Adam Granduciel wasted no time on banter between each song. They garnered some criticism for being a tad dad-rock, but I'd argue more so for the dads with a kid under one arm and a beer in the other. "Under the Pressure" and "Burning" sounded even more grand in scale as they washed over a blissful and receptive crowd that wallowed in every moment.

Wrapping up their tour and ready to unleash their hugely anticipated new record, Tame Impala took to the main stage with confidence and refinement, letting nothing go to chance and dropping a bomb on the festival. Easily the loudest set of the weekend, their psyched-out sound shook everyone within ear shoot and their mind bending visuals only amplified the atmosphere. "Elephant" was monstrous, "Feels Like I Only Go Backwards" was splendid and new tracks "Eventually" and "'Cause I'm a Man" seem destined for legendary status. Never excessive and always necessary jams were magnified by Kevin Parker's heady guitar and heavy synths that accentuated the sonic tones of the tracks, elevating the band to a new level. With momentum building along every step of the way, Tame Impala are on the verge of becoming the biggest band in indie rock and based on their current status, not only do they seem prepared, but ready to conquer and reign supreme.
Posted by marc at 8:30 AM