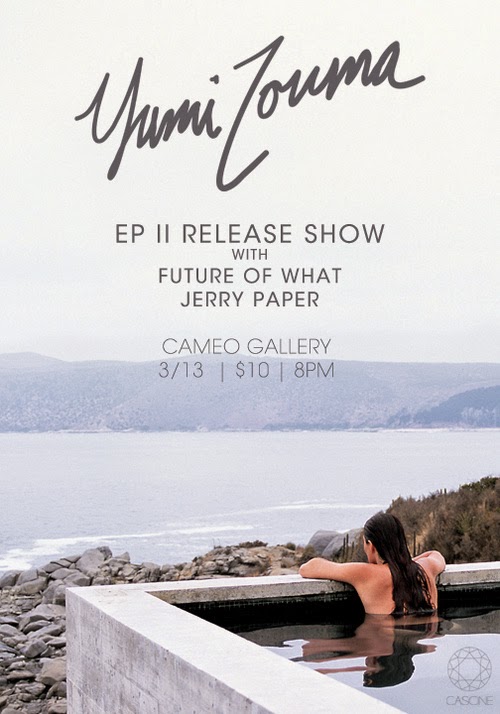 New Zealand's Yumi Zouma headed to Brooklyn to play a show for the release of their excellent new record EPII.

Bringing glossy synths and dreamy guitar riffs, the band from down under lit up Cameo Gallery for a sold-out crowd (their first ever) and sparkled through a set of their newest tunes and some gems from last year's great EP as well. In fitting form, the band maneuvered gracefully as they traded instruments and backing vocal work throughout the night allowing their singer to shine with her gorgeous vocals adding terrific textures to their sound. Balearic beats are met with lounge-y down-tempo vibes (similar to Cascine label-mates Keep Shelly in Athens) yet their sound is fresh and original creating a haze of clouded beauty set to soundtrack elegant dreams. "Alena" brought a 90s house touch to their cooler ethereal highlights and really elevated the crowd to embrace the dance-y rhythms locked in with each tune. New highlight "Song for Zoe & Gwen" was fantastic, buzzing with slick synth sheen, and "Catastrophe" (one of the best songs of the year) gave their set an extra push towards a huge swell of sound. Even after opening for pop sensation Lorde on recent dates, the band is still finding their niche on stage and it seems to only be a matter of time before they're ready for a massive audience of their own. Until then, take the opportunity to see this band in an intimate setting as they unveil their lush sound over small captivating crowds. Big things seem to be in their future.