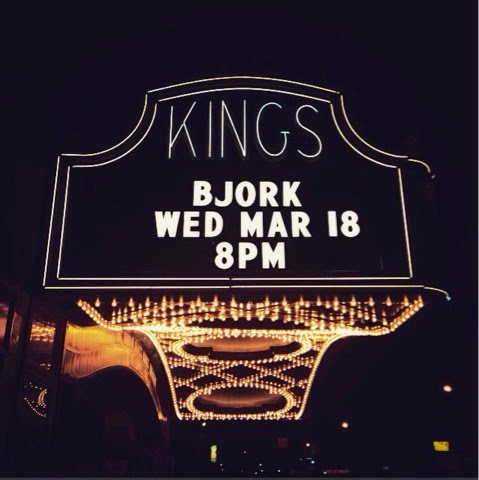 As part of her current New York City residency, Björk is on display with her retrospective at the Museum of Modern Art and is hosting seven shows across the city, culminating in an appearance at this summer's Governors Ball Music Festival. After two stints at the infamous Carnegie Hall, she brought her Vulnicura shows to Brooklyn.


You could spend quite some time trying to classify the genre of Björk. Is she electronica, trip-hop, post-jazz, avant-garde? None of it really matters when you dive into her expansive career. She is an artist that fits no mold and unleashes her true passion to her audience. Adorned in flowing white dress, the singer took to the stage with a headdress of thorns covering her head. Backed by fifteen orchestra members, a drummer and rising sensation Arca behind the boards, the evening was an emotional ride. She seemed to float from the wings of the theater as she took her place front and center, but from the opening of "Stonemilker", she stalked the stage, and used her voice like talons, clawing away at the crowd and ripping open fervent wounds. Exposing her emotions is nothing new for the legendary performer, but the heart wrenching themes of her latest record are still unlike any other. Her excruciating separation from long-time parter Matthew Barney is on full display as she sings of anguish and pain. The music is somber and the lyrics are devastating. Yet onstage, she moves with elegance and grace. Her body contorts to the rhythms and tones of each track and her movements, while striking, flow with pure sophistication. Behind her, elaborate projections followed the musics beats with each song taking on new patterns and colors that allowed the audience to enter a new realm. The album's centerpiece, "Black Lake", was particularly extravagant and her vocal range was simply uncanny. After a brief intermission, she returned to the stage for some older classics such as "The Pleasure is All Mine" and "Come to Me", the later was backed by some "Planet Earth" level videos of slugs fucking and again truly bizarre insects served as the backdrop for "I See Who You Are". This was more than just a performance of her songs, but rather a journey to her world and perhaps the most mesmerizing aspect was the human nature that was revealed. Often, artists of her fame and stature exhibit themselves behind a shield and their on-stage performance all a part of the show. Seeing Björk thrust her body and move so intricately, it seemed so human. So real and in time with the moment. Unrehearsed and more of an impromptu response of the live setting. A full body reaction to the music over taking her and letting all of her emotions run wild. This was not a show of spectacle proportions (although her voice and the musicians behind her were certainly spectacular), but rather an unfiltered look into her music. The songs were grand, but the performance was a minimal masterpiece. Arca's stellar production on Vulnicura transitioned to a live setting in a way that seemed unimaginable and the live drums provided new textures and layers to the songs that got a little lost on record. As she closed the show with "Wanderlust", she screamed out "Brooklyn get on your feet" and for a brief moment we got to hear a bit of Björk living in the now. Her veil was lifted and her vulnerability seemed ever more real. For a moment it seemed as if we saw the person on stage for all that she truly is and there truly is only one Björk.