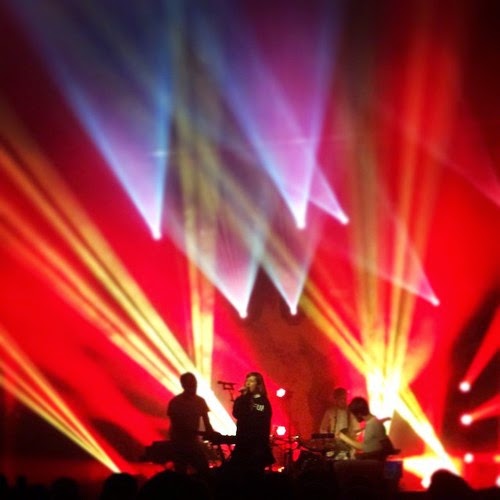 Upon releasing his best album under the moniker Caribou, Dan Snaith brought his stunning live show to Webster Hall for a downright explosive and captivating performance.

Crouched together in a tight-knit circle, the live band of Caribou was accelerating on all cylinders as they unleashed an interstellar display of deep electronics and spacey psychedelics. With each album, the path of Caribou has charted new territory reaching dream-pop, heavy dance grooves, and rich textures, never letting the audience in our the next move. On stage, the band performed with exquisite precision that made complex melodies and rhythms seem to unravel with great ease. Songs were brought to life with extended jams that allowed for expanded sonic plateaus and delicate balances of frequencies and cadence. Not only was this the best light show I've ever seen at Webster Hall, but the sound was incredible, pulsing with every beat and never once letting up the tension of each song. Every note was hit with precise force and rigor causing huge waves of euphoria to ripple through the crowd. On record, these tracks seem to be built with intense layers of carefully manipulated sounds and yet live, all the songs were given such breathe and substance it was as if their were truly being exorcised from a studio. The set called heavily upon Caribou's last two records, Swim and Our Love respectively, and although some of the dreamier sounds of Andorra would've been welcomed with open arms, the more dance and heaving styles of these later works really allowed for a truly special performance. Lights zig-zagged around the band, weaving in and out of a spectrum of bold colors that really propelled the energy of the audience. The vibes surging through the room were relentless and magical. "I can't do without you" proclaims Snaith on the mesmerizing lead single from Our Love, but really it's us that owe him all the gratitude.