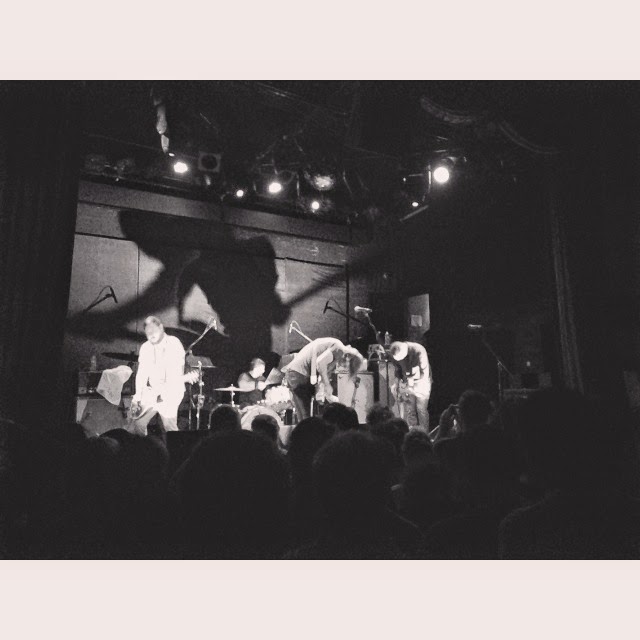 Bands come and bands go, but these days it seems that bands do come back again. Add another chapter the reunion book because Austin's Mineral are back in full force. For the first time in 17 years, the quartet are bringing their razor sharp hooks back to a devoted crowd.

Helping shape the classic emo scene of the mid 1990s, this group called it quits before they even released their second album. After almost two decades of gathering die-hard scream along fans, they've regroup to relive their glory days. Despite their rather small catalogue of songs, the band plowed through their hits with minimal banter. The audience did their fair share to make up for this, crying out for the favorites and thanking the band for coming back for a sweet victory lap. The band was locked into a groove, with their steady slowcore/post-rock builds that lead to beautiful breakdowns and their lyrics do all the talking for them. This didn't seem like a cash grab, but really something that they felt their fans deserved after so many years. The nostalgia factor reigned supreme over the evening as Sunny Day Real Estate, Thursday, Texas Is the Reason, and countless other band t-shirts dotted the audience and folded arms were only unbroken for the occasional arm thrust and air guitar. The impact of Mineral's music, along with other seminal acts from the time, shaped a huge part of the scene that exploded in the early 2000s, but the feeling and attitude of the crowd was much more mature than to be expected. Fan favorites "Slower", "Five, Eight, & Ten", "Gloria", and "Parking Lot" were all met with huge smiles. It was a show that brought back memories and feelings of a different time. It was a sincere feeling of community and unlike other reunion shows, this felt like it was part of a larger movement beyond the band onstage. Maybe glory won't be such a silent thing after all.
Posted by marc at 11:24 AM

Email ThisBlogThis!Share to TwitterShare to FacebookShare to Pinterest
Labels: Mineral