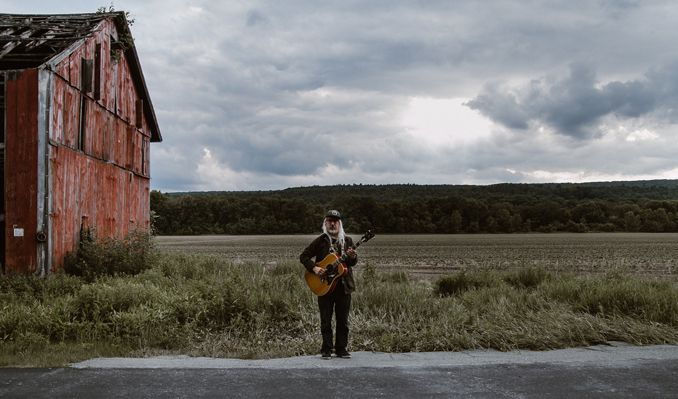 The legendary frontman of Dinosaur Jr., Mr. J Mascis, released a new solo record this year and came to Brooklyn's Rough Trade for an intimate acoustic performance to support his latest efforts.

An acoustic performance from J Mascis isn't a true acoustic performance. Yes, he has acoustic guitars onstage instead of his signature Jazzmasters, but the electricity flowing through them isn't masked. Even Nirvana quieted down a bit during their Unplugged set, but J doesn't really seem capable of keeping the volume below an 11. Quite frankly, no one can make an acoustic guitar roar with feedback quite like J and he made sure everyone knew it. Alone onstage, J spent little time talking between songs and plowed through 17 songs from across his career in just around an hour. "I got an old one for you" he said before jamming on the Dinosaur Jr classic "Little Fury Things" which saw one of the biggest reactions from the crowd all night. The new tracks from this year's excellent Elastic Days, his best true solo work to date in my opinion, were also big hits and sounded exceptionally full in a live setting despite lacking the support of a full band like they appear on the record. "This is my favorite song on the record" J claimed as he played "See You at the Movies" and it seemed the crowd agreed as heads nodded along to the track at an especially higher rate than previous tracks, but following it up with "The Wagon" was truly amazing. After hearing these tracks at an incredible volume and with the weight of Lou and Murph behind them, hearing them stripped down to "acoustic" guitar jams was really special. The main set concluded with a few more Dinosaur tracks, but the encore was where things took another special turn. For years, Dino Jr has been covering the Cure's timeless "Just Like Heaven" and once again, J turned up the distortion to make this track feel particularly heavy and the crowd jumped in to assist on Lou's growling scream, but it was the final number that really brought the house down. J covered Mazzy Star's iconic song "Fade Into Me" a few years ago for a 7", but hearing him do it live brought more justice to an already amazing cover. His raspy voice a whole new take on Hope Sandoval's velvet croon, it was surreal moment and a perfect way to end the intimate evening. For decades, J's music has covered hardcore, punk, college rock, 90s alternative, and now his latest solo records finding him making things a bit less extreme. Still, his maturity as a song writer feels so strong that this evolution feel completely natural and not like someone fading away into the distance.