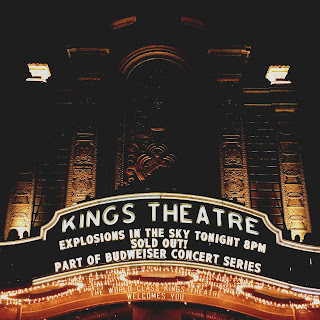 After releasing their newest album, The Wilderness, earlier this year, Explosions in the Sky wrapped out their most recent tour at the spectacular Kings Theatre in Brooklyn.


The Austin post-rock band have built up quite a reputation over the years for their dramatic soft-heavy-soft style and on the final stop of their tour, the band let nothing fall short of expectations. Behind a line of lights and heavy fog, the band unleashed monstrous overtones that erupted from twinkling guitars and came crashing down with full force. Their music is cinematic and not just because they've scored numerous films, but because when one listens to their records, it can make the most mundane moments feel epic. Checking the mail, washing dishes, riding the train to work, all of it can feel like an epic journey while listening to Explosions in the Sky. Perhaps it's the lack of lyrics that allow the listen to fully focus on what's ahead or build up each moment as the music begins to climax, or the fact that with each crescendo it really does feel like Matt Saracen has completed the most amazing pass to lead the Panthers to States. Whatever the case, their music certainly can unpack emotions and that is what definitely happened on a Friday night in Brooklyn. Playing a batch of new tracks from The Wilderness and a lot of old favorites, the band was in pristine condition. Newer tracks sounded extremely solid live, much more so than on record, and old classics like "The Birth and Death of the Day" and "Catastrophe and the Cure" saw great reception from the crowd. Still it was the tracks off The Earth is Not a Cold Dead Place that really took things to a new frontier. It was amazing hearing "First Breath After Coma" immediately transition into "The Only Moment We Were Alone" and it some how created a feeling of euphoria and infinite life, a moment where all troubles faded and anything seemed possible. Despite the name, it was glorious to hear those songs in a 3,000 person (sold-out) theatre and feel anything but alone. It was unifying bond and in these times, it felt not only needed but necessary. Tracks from Those Who Tell The Truth Shall Die, Those Who Tell The Truth Shall Live Forever were an even more welcomed surprise for me and the thunders "The Moon Is Down" was quite the closing moment. It was an incendiary evening in a gorgeous old room where the music exercised old ghosts and feelings and let the music transport the crowd to various times and places, hopefully putting things to rest and allowing new things to come to fruition.

Email ThisBlogThis!Share to TwitterShare to FacebookShare to Pinterest
Labels: Explosions in the Sky