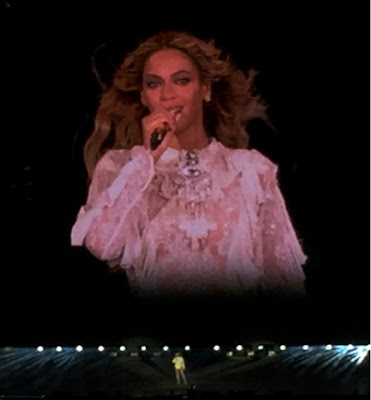 Beyoncé's world conquering Formation Tour has been met with sold-out crowds, police protests, but most importantly brilliance. On Prince's birthday, the Queen of Pop brought her majesty to New York City.

Just before 10:00 PM, the opening notes of "Formation" rang out as a squad marched on stage and declared their presence before the crowd. Her royal highness before us, Ms. Carter-Knowles unleashed her onslaught of pristine fury, dominance, and perfection over a captive audience. For two hours, Bey reigned supreme and dazzled her people with the monstrous hits that have catapulted her career beyond the stratosphere. To be in attendance was not only a joy, but also a privilege. Watching the ultimate pop superstar play to the masses and hold each person in the palm of her hand was captivating in every sense. Segueing from her Superbowl smash hit into "Sorry" titled the scales in her favor as a stadium of people put their middle fingers up and chanted "boy bye" as if their lives depended on it. The impact of this record still seems to grow and tonight's show proved how gargantuan this woman has become. Hit after hit, she slayed and slayed. Costume changes were linked by videos in the vein of Lemonade, and by the end of the evening, while her personal film rolled out, the crowd cheered and awed as if they were watching along to their own personal videos. Perfectly woven together, Yoncé smashed her hits into a perfect sonic melee of stunning pop sensations. "Hold Up" into "Countdown"(!!), "***Flawless" into "Feeling Myself", an acapella "Love on Top" which included an extra 40,000 plus belting out the anthem into "1+1", it was an awe-inspiring event. To demand her "Freedom", she stormed her back-up dancers into a pool of water and carried out her orders with every ounce of her being, putting forward energy that was felt all the way to the upper decks. She sprinkled some Destiny's Child hits throughout her performance as well and videos of her just after turning 16 flashed on the screens, showcasing that she has not lost touch with where she came from and how she was ended up on top of the world. In some ways, it was a feminist dream-gathering as images portraying sisterhood, the words "FLAWLESS" and "ashes to ashes, dust to side bitches" shot over the stadium and chants of "I WOKE UP LIKE DIS" echoed even after the show commenced. She strutted with power, swag, and admiration like a true force. The Queen did manage to sneeze at one point, but the crowd reacted as if everyone had been blessed by God and yes, "sneezed on the beat" jokes were made instantly. Her control, vigor, and fortitude amassed with the sheer sense that she truly and unconditionally loves her fans and what she does, only magnifies the allure that comes along with her show. In the current state of pop music, it's rather difficult to find someone who holds a torch to her level of genius. To be in her presence is a surreal and empowering sensation and not something one would soon (or ever) forget.
Posted by marc at 8:10 AM

Email ThisBlogThis!Share to TwitterShare to FacebookShare to Pinterest
Labels: Beyoncé