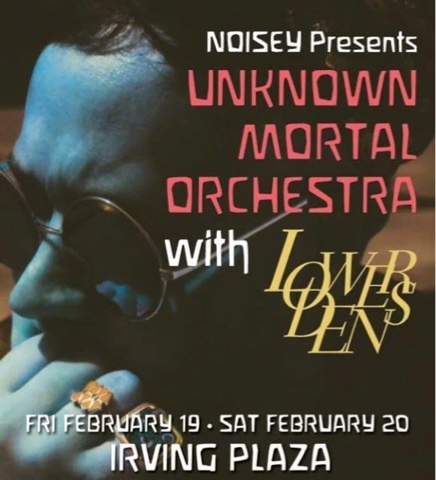 Unknown Mortal Orchestra and Lower Dens both had banner years in 2015. Each released their best records to date (two of my favorites) and their joint tour brought them to a sold out Irving Plaza.

Lower Dens were struck with tragedy earlier this month when they were robbed while on tour in Texas. At Irving Plaza, their energy was high and their set a real pleasure. This time around, the band performed as a duo which gave their show a bit of a different feel. Their presence a tad weakened, but their passion still in full force. The venue's sound was not aiding to their situation and at times they came across a bit flat, yet they made up for this with sheer fortitude and charisma. Jana Hunter's voice was as mesmerizing as ever and their synth infused noir-pop was shimmering and splendid. "I Get Nervous" was also a pleasant surprise that snuck up into the set of otherwise mostly new material. Even while operating a bit worse for the wear, Hunter executed a stunning acapella number to close out their set and dedicated it to the birthday of the secret "guy who sings in the other band tonight". It was a true statement and captivating moment.

Unknown Mortal Orchestra have forever been challenged by Tame Impala's astonishing rise to fame as indie rock's dominant psych-rock band. Truth be told, where Tame has steered towards yacht-rock synths, UMO bring a certain funk and charm that can really get people to boogie. Live, their jams really extend to a new head space that really boogie but can occasionally overstretch their welcome and bog down their set. Guitar solos were high flying with heavy fuzz and while at times dazzling, they also felt muddled and rather rushed. It didn't help when lead singer Ruben Nielsen crouched down or sat during the set as visibility became near impossible. Still, their set was cohesive and encompassed their full catalogue providing a wide array of the band's sounds. Older tracks like "Ffunny ffriends" and "Swim and Sleep (Like a Shark)" air on the breezier sides and allowed the set to breathe while still receiving huge praise and showcased the band's evolution and sonic expansion over the years. The segue from "How Can U Luv Me" into "Ur Life One Nite" was truely seamless as a rambunctious drum solo acted as the glue keeping the band locked in rhythm for an unexpected twist that took the show to a whole new level. The encore, however, was the real highlight of the evening as a horn section backed the band for an absolutely killer and flawless "Necessary Evil". Trumpet and sax crushed expectations and delivered monster results. As "Can't Keep Checking My Phone" closed out the night, the room was in bliss with UMO in clear command. Everything clicked together and the crowd lost their mind.
Posted by marc at 1:44 AM