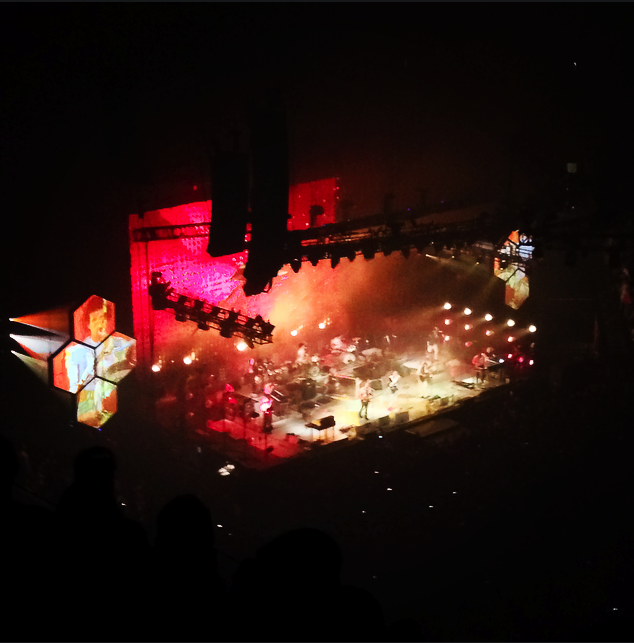 Watching a band rise to fame is a pretty extraordinary thing to witness. In the case of Arcade Fire, they have risen from the orchestral-indie band pulling from lo-fi aesthetics to their ability to be grand through delicate and moving melodies.

Ripping through curtains into "Reflektor", it was an unprecedented journey through Caribbean voodoo disco and arena crescendos. To immediately follow that opening with the 1-2 knockout of "Neighborhood #3 (Power Out)" to "Rebellion (Lies)" was stunning. Remember when that used to be their closing trick? They brought the show to massive heights directly out of the gates and never let it fall.  Their conquest from bedroom baroque-pop to stadium-hook superstars has been a thrill ride of epic proportions. It doesn't feel unnatural to mention them in the same breathe as titans such as U2 or Radiohead. Drawing from such dynamics as Grammy Album of the Year The Suburbs and the poly-rhythm sections of Refelktor to the new found explosiveness of older material, their audience is massive. Nostalgia has always been a key part of the band's lyrics which was beautifully captured throughout the evening. A dark and haunting "My Body is a Cage" put a freeze on disco pulses momentarily only to be hugely awaken with a thunderous "Neighborhood #1 (Tunnels)". A choreographed male quartet danced on a stage mid crowd during "We Exist" which took on new momentum in such an expansive setting. The ability to be both life affirming and larger than life in general makes them a definitive force and on another level. They've transformed to a band for the ages. Their catalogue is astounding and when resurrected on stage, they're on as mission that seems unstoppable. For two hours the band were a powerhouse of relentless rhythm. Their command is astounding and the evolution of the band is second to none. The synth-gem "Afterlife" brought shimmering sparkles and lead to Regine moving to the middle of the crowd to exchange vocals with Win for a triumphant "It's Never Over (Oh Orpheus)". Watching them sing to each other, across the arena was magical and their dueling gaze gave the song definition and shape before their invigorating "Sprawl II (Mountains Beyond Mountains)" closed out the main set.

Momentarily, bobble-head figures appeared on the stage mid-crowd and dove right into "Personality Crisis" by the New York Dolls only before being cut off by the band's return. This time, the band was joined by Buster Poindexter (aka David Johansson) and boogied right into his timeless classic "Hot Hot Hot". With sizzling vibes in place, the band perfectly transitioned into "Here Comes the Night Time", complete with confetti and streamers. A truly sensational moment that might have been the highlight of an already phenomenal show. The entire evening was one of the most spectacular performances of showmanship since Nine Inch Nails unleashed the Tension tour last year. Still, it's by no surprise that every Arcade Fire show will end with the anthem of "Wake Up" and yet the song never loses it's power. Watching an entire arena scream along to this song is still one of the most spellbinding and fantastic moments to observe. In some amazing way, Arcade Fire can crystalize their sound so that their impeccable live shows live up to every sensation of their recordings. They've already taken the crown as indie-rock megastars and they're now in the victory lap on the quest for global conquer.