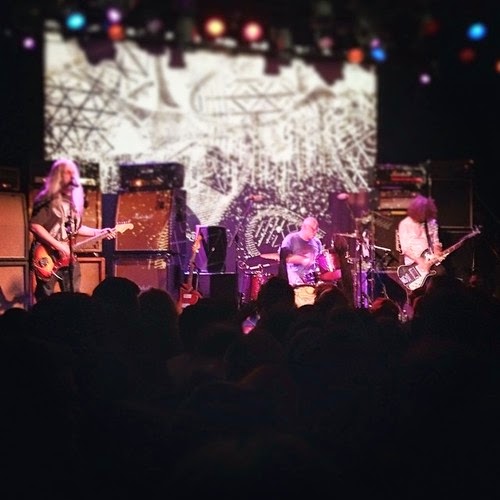 The first time I saw Dinosaur Jr. it was at Music Hall of Williamsburg with Screaming Females billed as the opener. It was the day Michael Jackson died. Today, I was fortunate enough to relive the experience without the passing of an icon.

By now, it's known that Screaming Females are a serious force on stage and whatever their records may lack, the band more than make up for in a live setting. Lead by guitar virtuoso Marissa Paternoster, the New Jersey trio wasted no time crushing powerful tunes that tastefully blended brilliant screams and serious shredding. The group was pleasurably loud and only began to paint the picture of the volume levels that lay ahead. Even though the night belonged to Dinosaur Jr., that didn't stop Paternoster from making the most of her band's opening set as she took charge and even marched into the pit for an epic solo during the stellar "It All Means Nothing".

Luckily the men in Dinosaur Jr. need not fear of having to follow such a stunning set as their songs still stand the test of time. "This is our first show in six months" shouted Lou Barlow a bit into the band's set, but there were no signs of these guys showing any rust or age. Every song kicked with heavy force and the trio seemed as sharp as ever. One by one the group tackled classics like "Feel the Pain", "Start Choppin", "In a Jar", "Freak Scene" and even the newer "Watch the Corners" without so much as making anything look difficult. Their infamous non-chalant expressions never leaving their faces. The air-tight rhythm section of Murph and Barlow is such a wondrous compliment to J's mesmerizing guitar that being able to witness a band in such a groove is truly sensational. They even managed to squeeze in extra volume super-extended solos, something not typically associated with hardcore and punk and yet sometime Dino accomplishes on such a huge scale. Set close "Sludgefeast" was exceptionally noisy tonight. It's rather remarkable to note that at this point in the band's career, they've made as many albums post-reunion as they did with their original line-up before their fabled break-up and all six of those records are worthy of high regard and excessive playing. While other bands have reassembled and road along on the hits of their glory days, Dinosaur Jr. are able to still kick out classic jams and show that there is no sign of extinction on the horizon for these living legends.