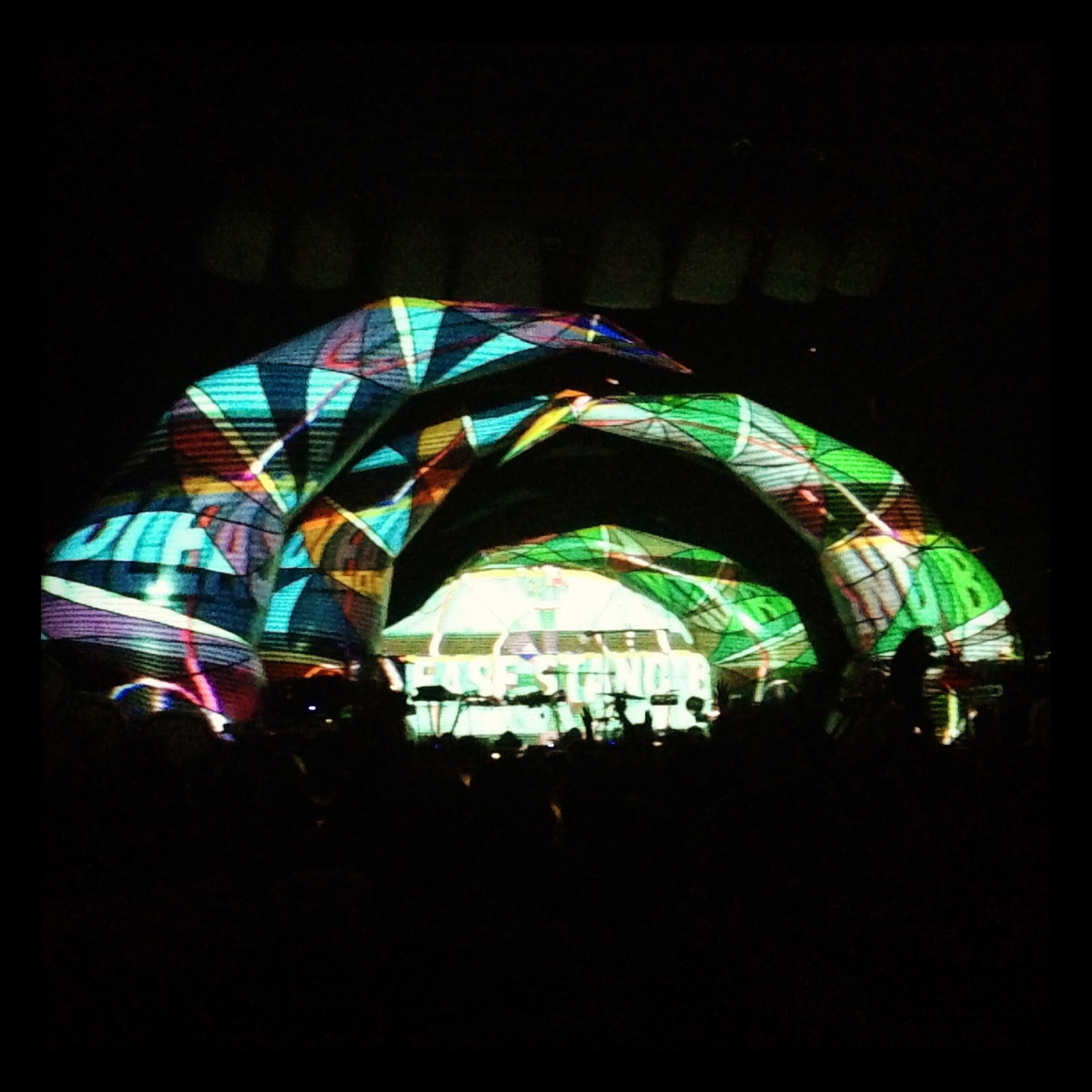 There was a lot riding on Animal Collective's make-up gig for their cancelled appearance at the Williamsburg Waterfront. My last encounter with the band was during their 2007 tour in support of the awesome Strawberry Jam. It was probably the most disappointing show I've seen in the past five years.

Playing a set of material mostly from the good (but not great) Centipede Hz, the group was surrounded by psychedelic claws and rainbow saturated teeth that hosted an outburst of warped images and television static. Exploding to life during new tunes "Applesauce" "Wide Eyed" and "Moonjock" the group was firing on all cylinders and seamlessly transitioned between each track. The slow burning "Crimson" got the night off to a slow start and lead single "Today's Supernatural" fell flat along with "Mercury Man" as Avey Tare donned his best Pat Smear hair style and sat cornered away while Deakin and Geologist kept the momentum at a high. Schizoid blasts of electric pulses were non-stop and throbbing bass lines echoed the cavernous hall; the band has never seemed so distant from their Sung Tong days. Panda Bear's booming "New Town Burnout" sounded as epic as ever and it was such a pleasure to see him behind a drum kit. As Merriweather closer "Brother Sport" began to take shape towards the end of the main set, the crowd reached a new level of excitement that had laid dormant for most of the new material. An epic sing-a-long from the crowd ensued during the monstrous hit as a wave of bliss overcame the audience. After what seemed like the culmination of sonic ecstasy for the evening, the song bled into "Peacebone" and Avey ditch his postion behind synths and boards for his traditional place in the front. His screams soared and his body lurched during each wail bringing the primitive nature of the band back into the mix. The encore kicked off with the under appreciated "Also Frightened" before the mega-sensation "My Girls" brought the crowd to a near frenzy. Things winded down with "Amanita", the closer from their latest release and probably the weakest track on the album. It was an unfortunate low to an evening of tremendous promise for a band not known to be crowd pleasers. Going into an Animal Collective show with any kind of expectation is a mistake and when you allow the band to take you on their magical journey with an open mind, you are far better off than hoping for them to play some sort of greatest hits set.