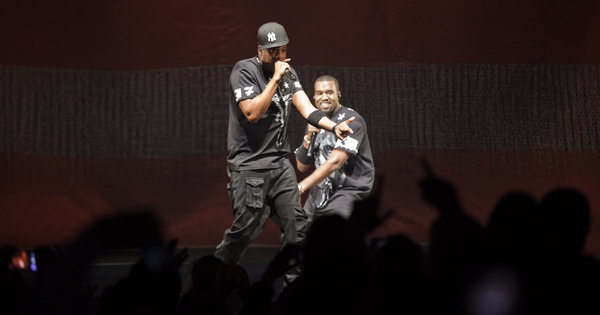 The reigning titans of Hip Hop are in the midst of their first joint tour in support of their recent classic Watch the Throne and dropped by the Meadowlands Saturday night for the first of four NYC-area shows. With no opening act, the lights went down at 9:00 before the two stars rose on two towering platforms on opposite ends of the arena and launched into "H.A.M.", the first taste from the Watch the Throne project. For this effort, the duo are keeping things minimal. The backing band is shrouded in darkness, Mr. West and Jay stick to their all black everything attire, and simple spotlights shown over minimal beams of light keeping all the attention on the hosts of the evening. For over two hours the two traded classics after classics in a non-stop attack of the biggest hip hop songs from the past decade. Such a presence and command over an audience was delivered in a way in which only these fellas are capable. Towards the middle of the evening, the champs broke things down and took a rest in the middle of the stage and swapped stories from the past while Hova weaved in a stellar "Hard Knock Life" into "Izzo". The two stuck to the classics, delivering what will soon be known as a legendary show as the audience seemed to only be more enthralled after each song. While Kanye kept thing fresh with recent favorites "Power", "Monster", and an ever impressive "Runaway", Jigga went old school with "Big Pimpin", "Nigga What, Nigga Who" and the epic stadium shaking "99 Problems". It was an evening of two friends trading tricks and showing off their skill with nothing but ease; this is them in the most simple of settings and natural talent running wild. The ultimate example of "less is more", these men are kings of the game, but on stage they keep it to best friends.