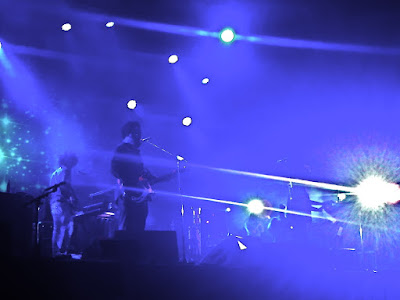 It is not every day that Broken Social Scene kicks off an evening. The indie rock veterans are worthy headliners, but they took the opening slot tonight in Williamsburg to "warm things up and fight off the rain." The band was in full force as five men stood at the edge of the stage, guitars blazing, as they kicked off an extended "Cause = Time" which was just one of many well received jams. Classic tunes were carried out with extra ambition as it would be the last time Broken Social Scene would play New York for quite some time. Instruments were passed back and forth between each track and horns blasted for "7/4 (Shoreline)" but it was the cover of Modest Mouse's "World at Large" that really got things exciting. Prime cuts "Fire Eye'd Boy" "Shampoo Suicide"and newby "Texico Bitches" were pieced together through smooth transitions and closer "KC Accidental" assured Kevin Drew that the band would not be forgotten.

A hometown welcome ushered in the men of TV on the Radio and they responded with a career defining set of songs. "Halfway Home" heated things up reinforcing the excellence of Dear Science, and the hits kept coming as newer numbers "Caffeinated Consciousness" and "Will Do" were dispersed among long time favorites "The Wrong Way" "Province" and "Blues from Down Here". Tunde dedicated an empowering performance of "Young Liars" to the late Gerald Anthony Smith, taking the already brilliant song to new heights. The sky was of slate and the white sparkles of the Manhattan skyline provided a serene setting for the long time Brooklynites. The band ripped through "Repetition" and launched into a howling rendition of the band's epic "Wolf Like Me". Many thanks were said to Brooklyn and the neighborhood for the years of support and a stunning execution of "Satellite" brought the night to a close.
Posted by marc at 10:57 PM