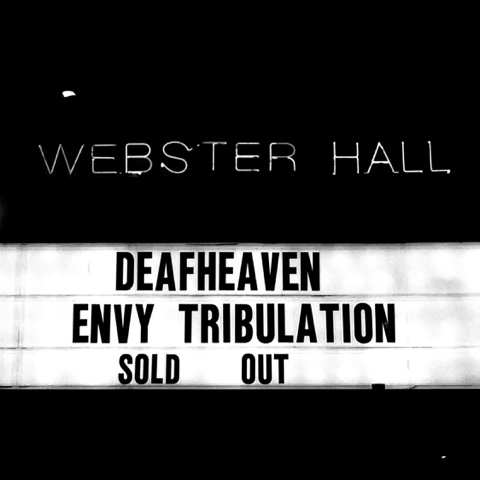 Deafheaven released their feverishly anticipated third record New Bermuda earlier in the fall. Their tour stopped by Webster Hall on Thursday for a night of pure mayhem.


On record, Deafheaven are an absolutely ferocious band. Live, they somehow kick it up another notch. George Clarke's maniacal vocals are a serious force of power that astonishingly never grow dull or weary. His ability to carry on with such force is a truly impressive feat unmatched by many others. His tenacity and showmanship is rather atypical for the frontman of a metal band as his enthusiasm and antics are more on par with Freddie Mercury and Jarvis Cocker, using his hands as wands to conduct the crowd through his band's storm of madness. Watching the group onstage, there are moments when you can forget you're watching a metal band. Between the screams, the guitarists barely look away from their pedals as they deliver massive displays of sonic triumph. Behind the drums, Daniel Tracy is a machine, playing every note in perfect time with insanely impressive fills that might make him one of the best drummers not only in metal, but all music. The new record may steer away from more of their shoegaze accolades, but their ability to drive home walls of noise is by no means diminished. Their set saw the entirety of the new record that translated extremely well live (as if there was any doubt) with last year's single "From the Kettle Onto the Coil". Bright hues of pink, blue, green, and purple lighting helped bring another new dimension to their performance. Deafheaven work well outside the realm of your stereotypical metal band, bringing in a new audience to soak up the beauty within the chaos. For the encore, the band brought it back to Sunbather. Kicking it off, they unleashed a mind blowing rendition of the title track that all but brought the crowd to their breaking point. Yet it was the rippling opening of "Dream House" that really saw total elation and the ultimate spirit of the crowd get released into the night. While earlier moments of the show sounded a little muddled, their grand finale was as epic as it gets. An incendiary moment when the music became so overwhelming beyond expression and everything came together in all the right ways with both the band and the fans giving their absolute all, pushing their energy to the max and leaving behind no regrets. A brief glimpse of pure magic, when the music served as an escapism from the moment and the volume transcended all emotions. A moment such as that it seemed as if we were all living and breathing in a true dream house.