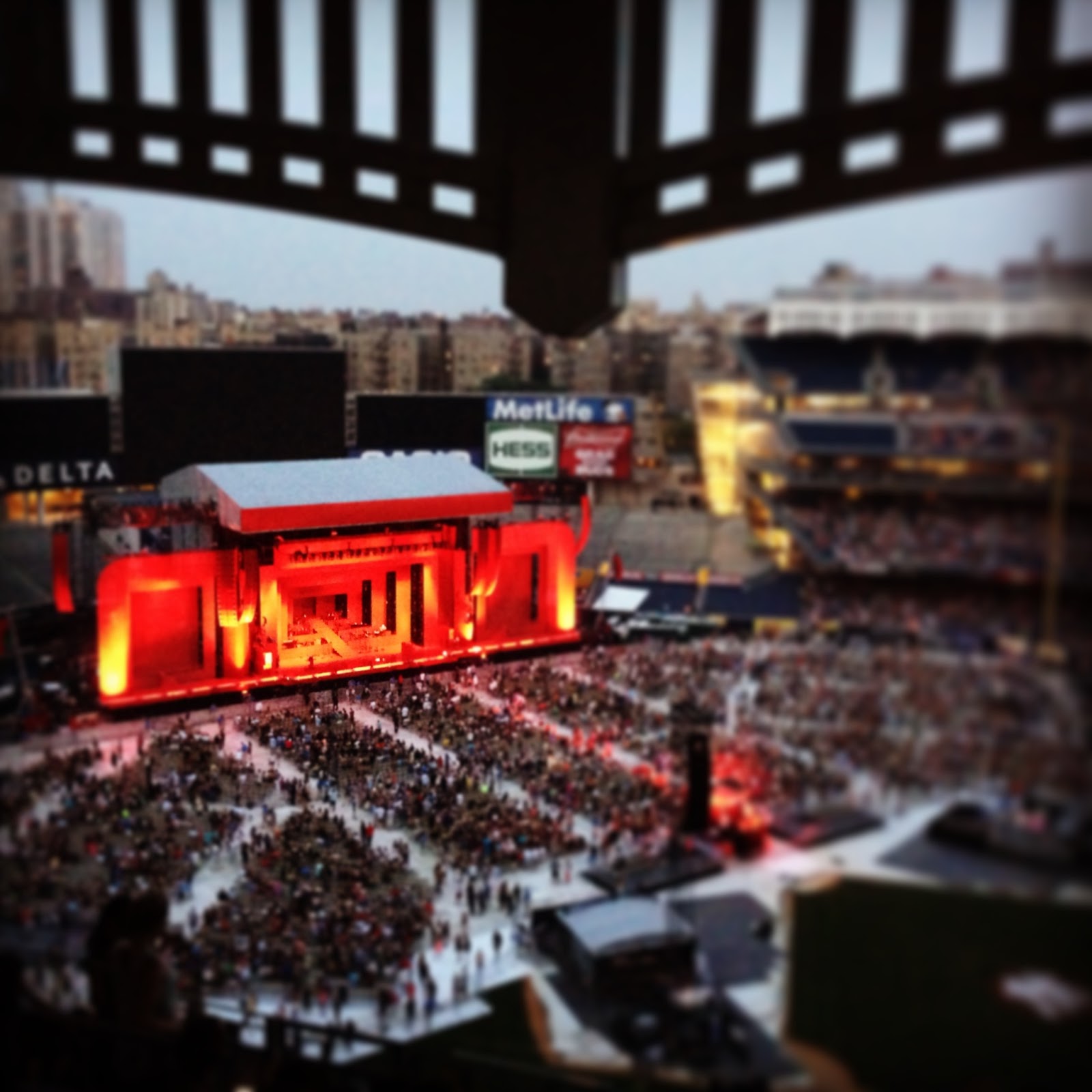 It seemed more than fitting that the biggest tour of the summer rolled into New York City on the hottest day of the year (the heat index in Brooklyn was hovering around 106 when I made my way to the Bronx). Shortly after 9:00 PM, the iconic baseball stadium darkened and erupted in cheers as the two legends of summer strolled onto the stage for their recent collaboration, "Holy Grail" off Jay's recent Magna Carta... Holy Grail. The early part of the set consisted of the two pop stars volley hit for hit with some added assistance. Mr. Timberlake sang the vocals on the Jackson 5's "I Want You Back" as Hova transitioned into "Izzo". The duo made some well calculated moves on how to make this show as smooth as possible while still making each of them the biggest names in the game. Setting themselves up as equals (a similar method that Jay Z and Kanye West used during the Watch the Throne Tour), there was no opener and this was not a pop vs hip hop show either, but rather a collision of superstars using their talents to cement themselves as entertainment legends. Both are heroes in their own right. Jay Z just scored his thirteenth number one album and while JT is fresh off the release of his first album in seven years, he is proving his showmanship with exquisite production.

Despite Justin's recent reclaim of pop music, The 20/20 Experience is currently the best selling album of the year, the night clearly belonged to the Jigga-man. Playing to his home crowd, Jay knows how to use his many anthems to rock arenas and stadiums and the massive Yankee Stadium wasn't new territory for the king of hip hop. Even with smash hits "Señorita", "Rock Your Body" and "My Love" couldn't keep up with Jay's "Big Pimpin'", "Hard Knock Life (Ghetto Anthem)", "Heart of the City" and the forever epic "99 Problems" (although Justin acting as the cop was surely a site to see). The middle of the set allowed each artist sometime personal time to highlight their esteemed discographies and where Jay powered through each number, Timberlake's definitely had to carry some extra weight. That isn't to say that his musicianship and talent were laking, his soulful croon and savvy dance moves had people screaming and the hit of the summer "Mirrors" was sensational, but next to Hov it was clear who had the upper hand.

As the show began the final run, Justin appeared in left field to cover "New York, New York" before Jay launched into the mega anthem "Empire State of Mind" which has certainly been played into the ground at this point, but when Alicia Keys made her way out to deliver her infamous chorus, the song reached new levels of supreme. The entire stadium belting along with the city's new anthem was the absolute high light of the night and one of the best moments of the summer.

The use of "Encore" in a Jay Z set will never be wasted at this point in his career. The mark that the night is about to come to a close is never easy, but when the biggest hits start coming, it's hard to be too upset. Not letting Jay outrightly steal the show by brining Alicia Keys for added back-up, Justin pulled out the stops as well by ushering Timbaland onto the stage for his role in "SexyBack". Another moment fans won't soon forget.

Nearly three hours after the show began, the duo closed out the night with their other big collaboration of the year. This time it was "Suit and Tie", the single that blasted Timberlake back into the spotlight before he aided Jay by singing the hook to "Young Forever" as the two ascended up the staircase set center stage. In a day and age where the notion of a what constitutes rock star status, these two are flexing their celebrity muscles with relative ease to show just how much power and control they have over the game. "And we're all just entertainers" the duo borrow from Nirvana on "Holy Grail", but these entertainers are in ballparks all their own.
Posted by marc at 10:54 AM