Redd Kross and the Men played Music Hall of Williamsburg 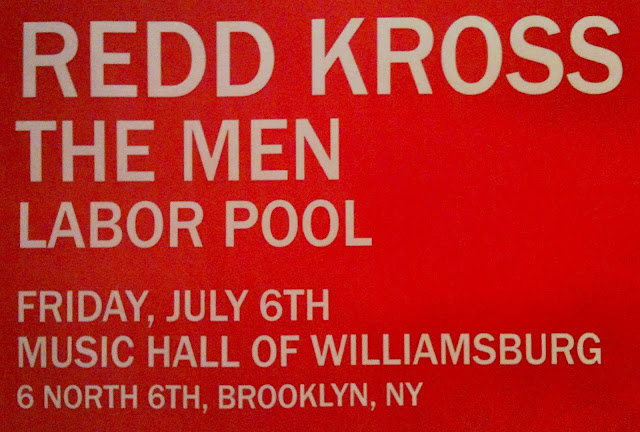 Home town punks, the Men, joined a reunited Redd Kross as part of the inaugural CBGB Festival last night in Brooklyn. Although only a small crowd had assembled by the time the Men took the stage, the band blasted through charging anthems and roared through a set featuring new material from their forth coming record. The opening chords of "Turn It Around" really got people moving and the astounding transition into "Open Your Heart" didn't skip a beat and was without question the highlight of their show. Brooding bass plagued the band's sound, but did not stop them from unleashing a stellar set and their unabashed energy made up for whatever technical issues were keeping them down. When Redd Kross hit the stage, the room was feeling a little tighter and their sing-a-long anthems were met with a hearty reception. Often revered as the band that bridged the power-pop stylings of Big Star and Cheap Trick with the punk of Black Flag and influenced bands like Dinosaur Jr. and the Pixies, the veterans were out in full form last night and delivered a career spanning set from the classic Born Innocent right up to new tracks from their first album in fifteen years. Led by brothers Jeff and Steve McDonald, the California punks offered some witty banter between songs and talked about the joys of being in the band again. After discussing their self-proclaimed laziness of recent memory, the brothers opened up about their excitement of more touring in the future and their new found energy was apparent as they ripped through an extensive set and even returned for several encores that included a full performance of their first EP that the band recorded with Greg Hetson before he joined Bad Religion. The sugary sweet pop-punk blowouts proved that these aging rockers could still nail a slick guitar solo and Roy McDonald might be the most entertaining drummer in punk-rock as he never missed a chance to show off his drum stick twirling skills and still kept the band right on pace.
Posted by marc at 12:31 PM