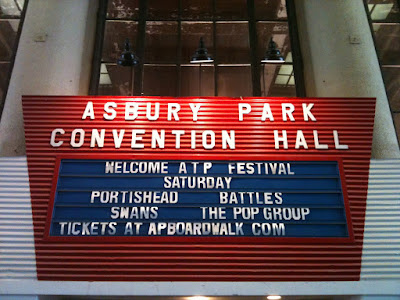 By now, you must have heard that the American rendition of I'll Be Your Mirror invaded Asbury Park, NJ this past weekend. For 3 days the decaying Convention Hall and accompanying Paramount Theatre and Asbury Lanes played host to a rare appearance by Jeff Mangum and the East Coast return of Portishead with tons of other great acts spread out over the course of the weekend. Shellac took to the stage Friday evening for a pummeling performance of heavy jarring guitar and witty banter. Saturday saw Battles rock through heavy hitting tunes mostly from their latest effort Gloss Drop playing with such precision and ease and sneaking in trimmed renditions of "Atlas" and "Tonto" to accompany newer favorites "Ice Cream" and "My Machines". Deerhoof blasted through noise-pop tracks early on Sunday and Public Enemy gave a weekend highlight performance ripping though Fear of a Black Planet and other greatest hits before Portishead closed out the Convention Hall Sunday evening.

While there were numerous fantastic shows throughout the festival, the weekend sincerely belonged to the headliners. As the lights descended on the declining Paramount Theatre a shadow moved across the stage and a hush fell over the crowd. An orange glow illuminated the legend in the flesh, Jeff Mangum, as he sat center stage, surrounded by four guitars, and gently dove into what would be a magical evening. As nearly every number from the infamous Aeroplane Over the Sea and several tracks from the also excellent On Avery Island rang out over the crowd, the audience watched along silently still in supreme wonder that this event was actually taking place. Mangum hardly spoke as he delivered stunning renditions of such highly regarded songs many thought would never be heard again. As main set closer "Holland, 1945" came to a close, Jeff quickly set down his guitar and exited off stage. He shortly returned for a request of "Naomi" and final number "Engine" and the left again into darkness leaving a crowd of people in utter bliss.

English gloom and doom trip-hop pioneers Portishead, took to the stage Saturday night to a glowing P projected behind the group before they ripped through an unbelievable performance the Eastern seaboard had been anxiously awaiting since the late '90s. After two tracks from 2008's remarkable Third, Dummy opener "Mysterons" sent the crowd into a frenzy as the band went on to unleash stunning renditions of classic numbers "Sour Times" "Glory Box" and a breathtaking intimate version of "Wandering Star" all of which were fit between Third sensations "Magic Doors" and "The Rip". Perhaps it was initial reaction to actually seeing Portishead, but Saturday's out of this world set could not be matched on Sunday despite the inclusion of recent highlight "Chase the Tear" and a ridiculous "Machine Gun" featuring the one and only Chuck D of Public Enemy spitting verses from "Black Steal in the Hour of Chaos". After years of staying out of the spotlight and earning a reputation of being a reserved performer, Beth Gibbons capped off Saturday's spectacle by diving into a crowd of adoring fans.