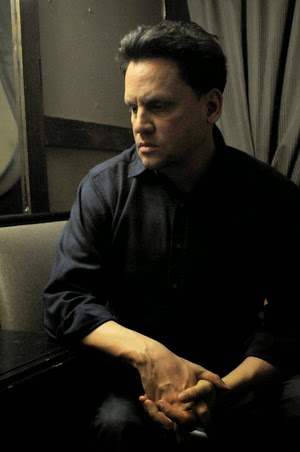 In some ways, it should not come as a surprise that Mark Kozelek is both a hilarious man and truly honest when behind a microphone. As he tours behind his latest release under his moniker Sun Kil Moon, he brings with him a trio of musicians who bring to life the sparse, barren, and powerful songs of his masterpiece, Benji. This performance was not a spectacle, but instead an intimate evening of lyrical beauty. A desolate stage in a hall less ornate than the Beacon, United Palace or the crown jewel that is Radio City, served as a supreme setting for this night. Sitting poised and distinguished (and eerily reminiscent of Picasso's The Old Guitarist), he sunk in for a truly extraordinary night. Lights were dim and cast shadows across the faces of the men onstage, barely allowing for their emotions to come across and certainly not allowing for any distractions. His voice was booming. Echoing from every corner of the theater as his nylon stringed guitar brought a warmth to his striking stories. And yet to say it was all about the music is still a little misleading. Sure, the set was brilliant. The raw imagery and emotional toll was intense and yet Mark was able to add his personal charm between each number allowing a side of him never quite seen in his songs. "So the new album is out. It's getting ok reviews I guess. Pitchfork or whatever. All the kids only read Pitchfork. I get a good review on Pitchfork and I get emails from like 50 different countries. I get a review in Rolling Stone and I get a call from my mom's boyfriend." His narrative of his life is so poignant on record and when he is live on stage a whole new character seems to exist. He dabbled in sagas of his latest acting stint in which he was trapped in the middle of nowhere Switzerland with Harvey Keitel and non-stop talking Michael Caine. "I was working on some new material while I was on set and included song titles like 'Will Michael Caine Ever Stop Talking' and 'The Only Affection I've Seen Lately Is a Mediocre Hand Job.'" Clearly his role as the bassist in Stillwater hasn't left his acting career satisfied. He also delved into more detail about the problems of having a hit album. "I'm so fucking sick of this question. Everyone keeps asking 'Is the new album true?' Yes, there really is a Red Lobster in Ohio. Yes I will be sad when my mom passes away." The dynamic between the banter and the songs is perhaps what made the evening so magical. "That dude looks like he's from Williamsburg. Sorry we didn't play your neighborhood, man." His conversation never grew dull, even as his gut-wrenching tracks were laid on thick as the full arrangements for the Benji tracks were absolutely stunning. "Carissa" and "I Can't Live without My Mother's Love" were particularly divine and "Dogs" came across more heavy and powerful than anyone could've anticipated. For over two decades Kozelek has been a prominent name in the indie scene, but the unpredicted success of his newest record has brought him back into a well deserved spotlight. "I use to hate Pitchfork, you know? In the '90s all these young kids would come to the show and now all these 24 year old girls are coming to my shows again. I guess Pitchfork is cool." The remarkable ability to switch tones during the performance was uncanny and if Sun Kil Moon can maintain this groove of brilliancy, young kids will be going to these shows for years to come.
Posted by marc at 8:57 AM